skip to main | skip to sidebar

The State of Things

Hopefully I don't have to explain this to anyone who seeks out a blog like this, but for anyone else who might accidentally stumble upon this: A. There's no such thing as a "long sports coat."

B. That's a morning suit, aka daytime formal wear (the daytime equivalent of white tie and tails).
SMH. 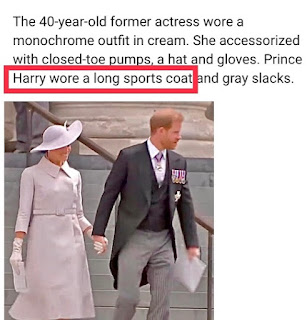 "The famously frugal royal got plenty of wear out of his clothing according to Tina Brown's The Palace Papers."

Posted by Johnny at 4:34 PM No comments:

The funny thing is this video is edited: the rear blade of his tie is longer than the front when he finishes tying it and puts on his shoes, but it's fixed in the next frame when he puts on his jacket.
Posted by Johnny at 11:53 PM No comments:

I stumbled onto this YouTube channel tonight. I had seen this gentleman post pictures of himself on StyleForum periodically, but I never knew until now who he is or that he's on YouTube.

Posted by Johnny at 7:48 PM No comments:

Apparently today -- May 15 -- was most traditionally "Straw Hat Day" in the United States, the day when it was no longer socially acceptable to wear a felt hat.

The reverse, Felt Hat Day, was often on September 15.

I say "often" because apparently this varied somewhat by era, but also by region within a given era. That's only sensible, as obviously it generally warms first in the south and latest in the north; concessions to weather, rather than to a fixed date -- especially if that date is arbitrary, like May 15 -- seem to be a better guideline, within reason. An equally logical argument could probably be made for the first day of spring, for Easter, for May 1 or May 15, or for Memorial Day for Straw Hat Day, according to locale and even to that locale's weather in a particular year.

For example, thankfully it's been unseasonably cool so far this year where I am in the Midwest, so it would make no sense to wear a straw hat when it's in the 60s -- or even 50s -- and raining, no matter how far it is into May.

(For a fascinating history of all of this, see the book Hatless Jack.)

Anyway, I bring this up this year because I just saw these neat photos on social media.

According to Hatless Jack, the straw hats men wore back in the day were usually inexpensive and pretty much disposable, so it was common for men to throw them out when Felt Hat Day came in September. Hopefully the men below were just staging a photo and weren't really doing the reverse and throwing out their felt hats!

Of course, these arbitrary dates and rules are mostly antiquated trivia in 2021; today few men wear dress hats at all, and those that do are free to do what they want. 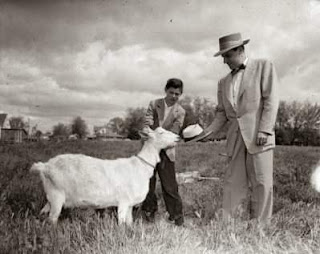 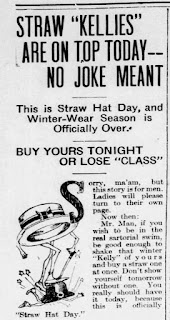 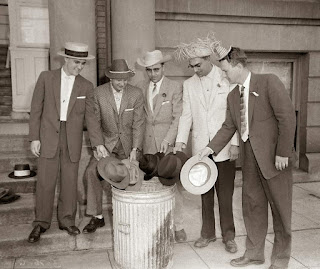 Posted by Johnny at 1:37 AM No comments:

I Find Roger Stone Guilty of Being Stylish

Say whatever else you wish about Roger Stone (but don't bother saying it here, because I don't publish political comments on this blog), but Roger Stone is one stylish dude, and he's doing about as much as one man can to keep the homburg alive. 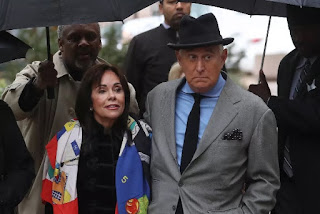 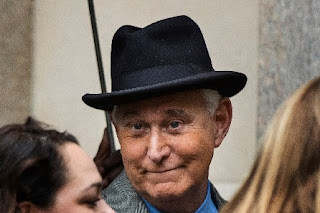 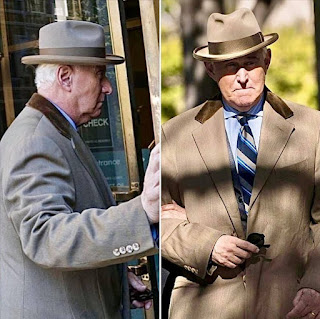 Having said that, I'm not sure that maintaining his usual style was the wisest strategy for a trial, because I could see his appearance causing the jurors to dislike him on a visceral, envious level -- irrational as that may be -- and to want to "punish" him for appearing to be wealthy.

I'm reminded of a story that John T. Molloy told in his 1975 book, "Dress for Success," as an example of how being well-dressed ultimately means using clothing as a tool, not necessarily being dressed up to the max.

He once consulted with a criminal defense attorney who was defending someone charged with some kind of white collar crime.

Molloy advised that the defendant ditch his usual stylish, expensive clothes for the trial, and instead show up every day in cheap, polyester slacks that were too long; cheap, heavily-worn shoes; a short-sleeved dress shirt; and a stereotypical lower-middle-class polyester, clip-on tie.

The intention was to make him look like an unsophisticated lackey who could not possibly have pulled off whatever he was accused of, and who was set up to take the fall by the real guilty parties who were higher up in the company than he was.

Molloy didn't comment on whether he was guilty (and probably didn't know and didn't want to know), and there's no way to know whether his appearance played a significant role in the verdict, but it's entirely possible that his clothes were the deciding factor in influencing the jurors, at least sub-consciously.

Of course, that lack of subtlety is much harder to pull off in the internet age, when it's easier to look up what even non-celebrities normally look like -- and would be impossible for a celebrity like Stone to achieve in 2019 without his intentions being transparent, since there are tons of photos of him online from over the years -- and even more because he has frequently and publicly appointed himself as a style arbiter.

But I would've subtly toned it down if I were him: probably a solid, dark navy or dark gray suit, basic white shirt (point- or basic spread-collar with barrel cuffs), and dark, discreet tie with basic black balmoral shoes and solid black socks, with a basic trench or fly-front raincoat if needed for rain and/or cold. No hat, no scarf, no pocket square with the suit (which I would advise under almost no other circumstances).

Regardless, he chose what he chose; now all we can do is wait -- then we can speculate about whether his clothes helped him walk or helped do him in.